I have been experienced that the circuit breaker for the winchlass will break for a reason unknown, most likely is it because it may be to weak for her gross weight of 11.5 ton. It is very enoying to be pulling up the anchor and be forced to run down to reset the circtui breaker, especially when you are in the final part of work.

Therefore I have now sold the winchlass togehter with its control box. Since Simpson Lowrence where overtaken by Lewmar I could have replaced only the motor/gearbox since it would have fit, but I found a used Lewmar V3 Gypsy for less than 200 USD on Blocket. It have been installed on a 48 ft Princess that have caught fire and was totaly destroyed. Luckely the winchlass was mounted on the rear plattform, only the motor/gearbox was destryed becasue of the acid that was created by the fire, the stainless steel part was unaffected.

On eBay I found a new motor/gearbox in Florida and a new control box in the UK.

I had to replace the control box becasue the V3 motor is controlled with three power cables, one negative and two alternating positive cables. The old winchlass motor had only two cables, they alternated positive and negative depending of the mode of operation (up or down). Unfortunattley the eBay seller sold a control box that they later could not locate, so they sent me a used control box manufactured 1996m it have previously been installed with a Simpson Lowrence, believ it or not but the same item as I sold togehter with my old winchlass, unbelievable !!
I ahve returned it to them and I am now awaiting the refund, hope I not waait invain.

Below is the previous deck installation and here you see very clearly the angle of the chain into the gypsy (ref to text below). 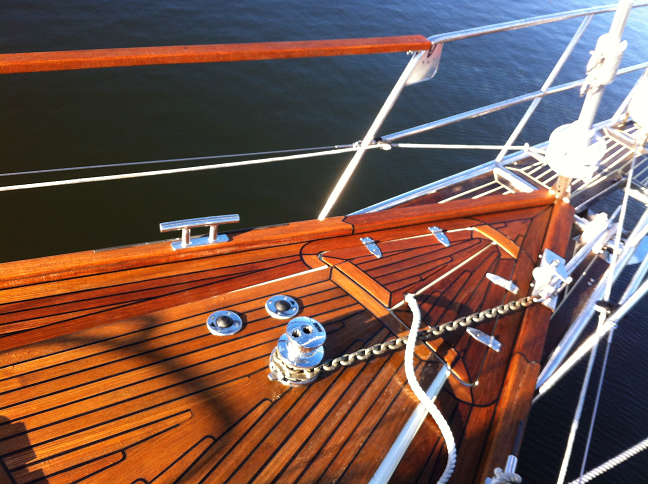 Below is the Simpson Lowrence Anchorman Power installation.

On the below picture I had been dissassmbled the "new" Lewmar V3 Gypsy, it was really a quick fix.

Below is when I have tested to fit it in the old holes. It fitted nicelly but I was not satisfyed with the angle between the chain and the gypsy so I will turn the gypsy approximattly 20-30 deg. to port to better align with the chain, doing that will have a great effect on how much of the chain that is engaged on the gypsy, this of course affecting the operation positivly.
You could actually see on the picture that it is turned to port of the centerline, compaired with the mittfisk of the teak deck. It will be turned to starboard just as much.
The red pin is the free fall feature. On this picture the gypsy is not pressed all the way down because then I am affraid of not be able to pull it upp again becasue it is really a tight fit, thats why the chain hole seem to be off centre of the V3, its an illussion. 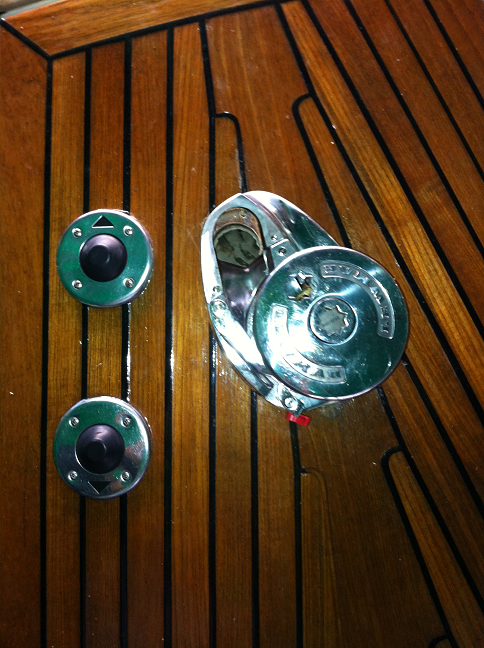 2012-11-10
So, nobody remembers a coward, time for some hard work.
Below is when I just have drilled the new hole for the chain. I have used the template and turned the centerline of the winchlass approx 20 deg. I also drilled the hole with an angle, its not absolute vertical, I leaned the drill machine 30-40 deg rearward. 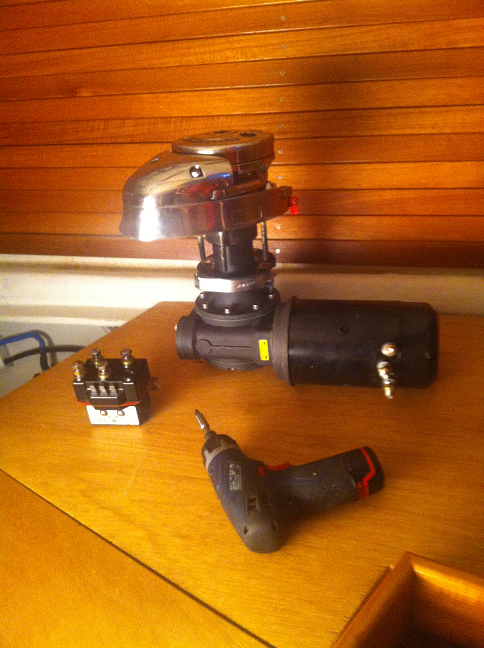 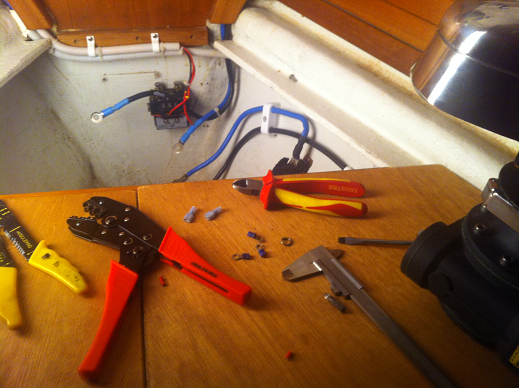 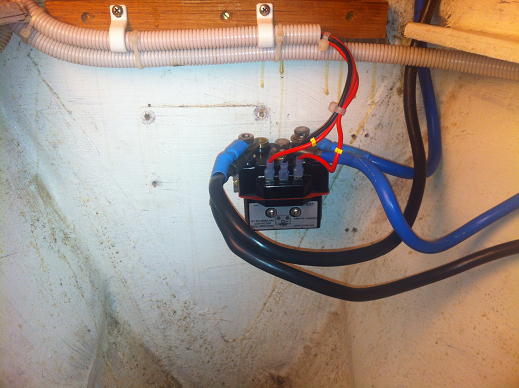 While I anyhow was upgrading I did also install a wireless remote, pics come maybe. 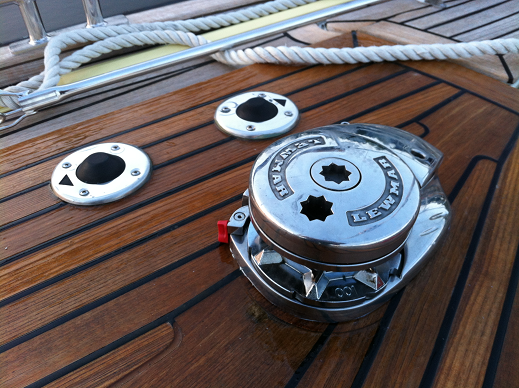 I also improved the chain tunnel, before thay had installed a rubber matt that the chain should glide on, which it didnt. Instead I went to IKEA and bought a couple of those thin boards that you use in the ktichen to place below the bread when you want to slice it without damaging the table, its a kind of thick nylon/plastic. 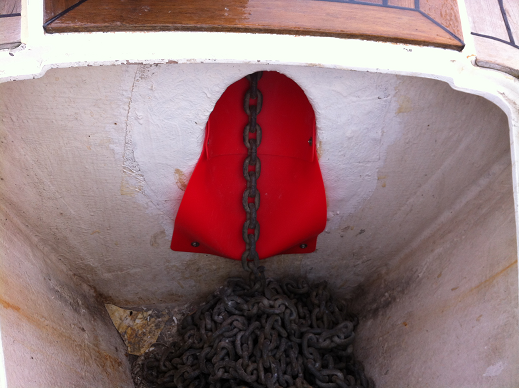 And of course, just to make life not so easy I had to replace the gypsy (Chain Sprocket), the one that came with it was for an 8 mm chain, I had 65 meter of 10 mm that I didnt want to replace.

Now its up for sale on eBay :) 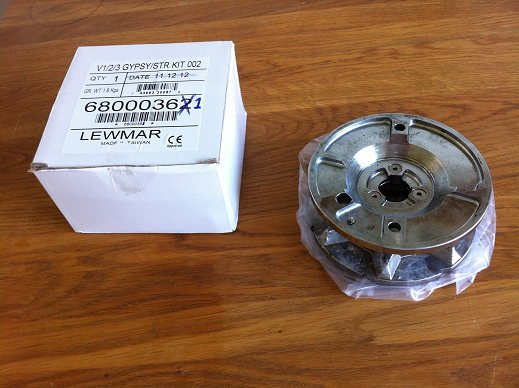